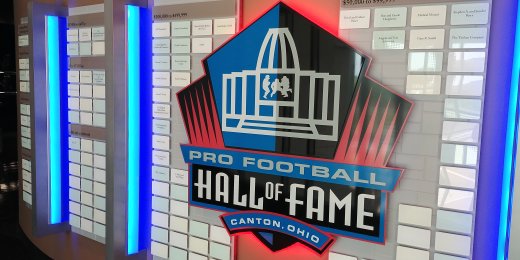 So Much Fame, All in One Day

So, after seeing the Linesville Spillway, I headed slightly south to Canton, OH. For the first, of many times, I missed the entrance to my destination and had to circle around a few times. Much later in my trip, I would start to rely more on my cell phone’s GPS once I was cl

oser to my destination because it was more detailed than my car’s GPS.

The Pro Football Hall of Fame site is surprisingly small and outdated on the outside.  It appeared they were in the process of adding a new building. But the outside wasn’t what I came for. Inside you start your tour looking at classic football cards for players from a long ago era, up to more familiar players like Joe Nameth and Deion Sanders. In this section of the museum, photos are strictly prohibited. I would assume so that the cards cannot be replicated to be sold as “authentic.”

Next, the museum has displays dedicated to the advancements in the game, including when football became a passing sport when the Forward Pass was introduced in 1906. As well as dynasties that included the Steelers, 49ers, Cowboys, and Patriots.

Finally, the best part of the museum, the actual Hall of Fame. There was a reverent hush in this room. Walls covered in bronze busts of players, including the 2017 class. Of course, I took pictures of my favorite players along the way. Forgive the quality of the images, they were taken with my camera phone, not my real camera.

After a much-needed lunch at Jerzee’s Sports Grill across the street from the Hall of Fame, I headed north to Cleveland, OH for the Rock & Roll Hall of Fame. In the interest of time, I took the interstate. On the trip so far I’d spent more time on the Interstate than I wanted to, and the sporadic rain storms made it an even less pleasant drive up I-77.

Once again I couldn’t quite figure out where I was going once I got to the Rock & Roll Hall of Fame, much to the very vocal dismay of a driver waiting to turn left. I tried to wave him along, but he decided he wanted to scream and yell at me to go. So, where I later found out I should have turned left to get to the parking lot, I went straight. Made a U-turn, turned right, turned right again, and finally found parking.

My two favorite exhibits at the Rock & Roll Hall of Fame were the memorabilia collections on the bottom floor, and the Rolling Stone Magazine cover exhibition on the top floor.

I really enjoyed everything I saw, but very quickly realized I’d overextended myself in my planning. One day in, and I already had to remove the Christmas Story house from my trip list, because I didn’t have the mental capacity to figure out exactly where in Cleveland it was. It was time to head to camp, still an hour and a half away near Cedar Point. I wasn’t mad at myself for overdoing it, I knew this whole trip was to be a learning experience and anything I didn’t see I could easily add to a new journey.

The next day of my trip would be all about classic cars, with the Auburn Cord Duesenberg Museum and the Studebaker National Museum. One was recommended by my mechanic and was definitely the better of the two. I’ll tell you which one next time…