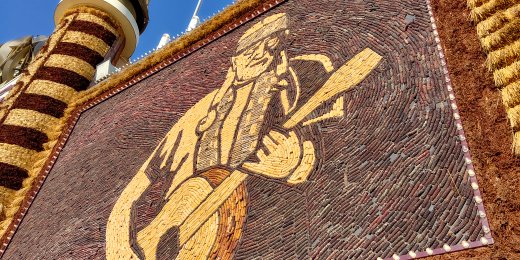 On August 27th I crossed into South Dakota. I made it through what people described as the most tedious part of my drive. Iowa is very flat, and the roads are very straight. After excessively exceeding the speed limit a couple times, I learned how to use my cruise control in Iowa.

My first stop in South Dakota was a true wonder of the Midwest; The “World’s Only Corn Palace” in Mitchell, SD.

Originally created to showcase South Dakota pride in their corn, every year the concrete palace is redecorated with thousands of bushels of corn, grains, and grasses. I arrived before the murals were changed from the 2016 theme of “Rock of Ages.” The theme is changed at the end of the harvest season in October.

In addition to the Corn Palace, I discovered a brilliant business that served drinks and haircuts and an old Saloon for sale.

The Brew Parlor in Mitchell, SD

Saloon for sale in Mitchell, SD

I checked in to the Mitchell KOA just a few miles from the town. The owner of this KOA clearly took great pride in his campsite, as could be seen by the adorable bathroom design, and his warm welcome when I arrived. Here I met another fellow traveler who suggested sites for me to see along my route. I shared with him the maps I was using to monitor the wildfires taking over Montana. We exchanged numbers and agreed to meet up at a campsite in Glacier National Park. He piqued my interest in looking at other accommodations while camping, specifically his conversion van. Even though my tent was exceptionally easy to set up, having to do so every night was a bit exhausting. The idea of being able to just crawl into the back of my vehicle was starting to sound very nice.

I hit the road the next day with a plan to grab something of substance to eat in Pierre, SD. I was starting to become frustrated with the inconsistency of the small propane grill I was gifted, and breakfast was cold coffee and cheese. Later I would switch to a charcoal grill of the same size. In Pierre, I discovered Big Tom’s Diner, serving classic diner food (my favorite!). Belly full, I was ready to continue on to the Badlands by way of Wall Drug.

I think I saw my first sign for Wall Drug about 100 miles from the location. Wall Drug’s history started in 1931 advertising Free Water for weary travelers. What began as a small drug store has now stretched to an entire block of shops, a cafeteria, and even a Traveler’s Chapel. And yes, you can still get free ice water there.

From Wall Drug, I doubled back to the Badlands National Park. Words can not give the Badlands justice. I’m not even sure the pictures I took can do it justice. All I can say is that you have to see it for yourself. When I entered the park, my heart skipped a beat, and I was in complete awe of the beauty of the jagged spires and deep gorges that stretched to the horizon in every direction.

When I arrived at the Cedar Pass campgrounds in the Badlands National Park, I was dismayed to see a sign that said the campsite was full. Fortunately, a gentleman drove up from the campsite and said the sign was wrong and there were plenty of open sites, indicated by the lack of a campsite reservation card. So I drove around the campsite, selected my site, and headed back to the empty check-in gate to fill out my form and pay my reservation fee.

Check out this funky video I made of driving through the Badlands.