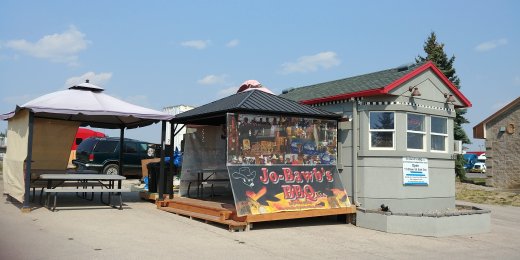 August 30th was a relatively uneventful day. Thermopolis was a two-day drive, so I set out from the Blue Bell Campground to make my way into Wyoming. I stopped at a Walmart in Gillette, WY to buy a 14″ charcoal grill to replace the propane grill I’d all but given up on.

Thanks to my travel concierge (aka my mom, tethered to her computer, sending me places to eat, things to see, and warnings about the road ahead) I picked up lunch at a little shack on the side of the road called Jo-Bawb’s BBQ. I was reluctant about a BBQ joint in Wyoming, but who could go wrong with a place called Jo-Bawb’s? I highly recommend it if you happen to be in Gillette, WY.

From there it was just an hour and a half to Buffalo KOA for a relaxing afternoon of just sitting around, reading, and cooking on my new grill.

The next day I headed through the Bighorn Mountains to Thermopolis, WY. Instead of re-writing about my relaxing time there, check out this post I wrote while in Thermopolis. By the way, yes, those are snowcapped mountains in August in the pictures below.

Driving through the Bighorn Mountains – The Video

Thermopolis was the beginning of the haze from the wildfires more than 500 miles away in Montana, but you’ll need to wait until next time to hear more about the challenges presented by the massive fires.

Midwest US, North West US, The Great Roadtrip, Travel