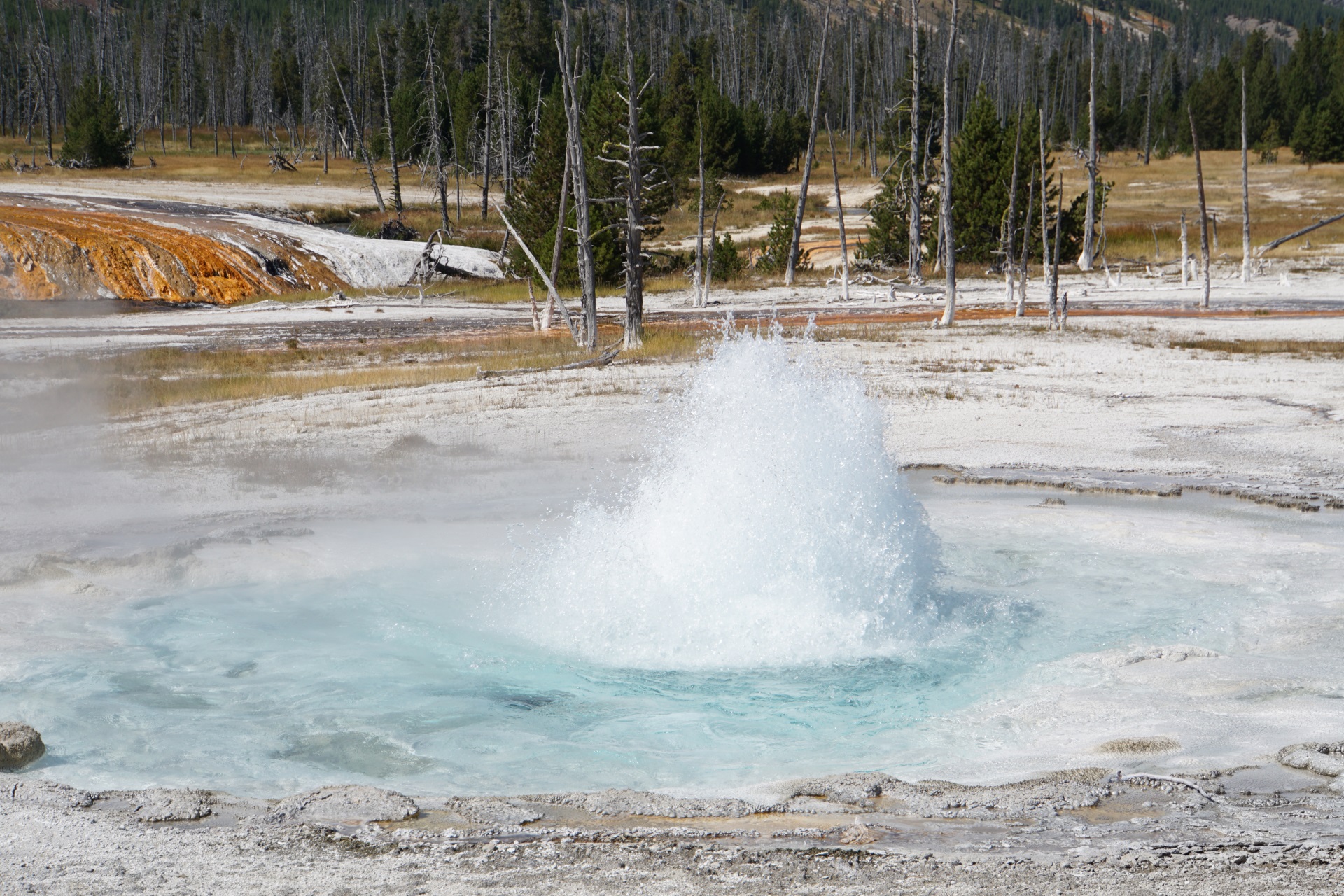 I woke up the morning of September 3rd to my first chilly morning. It was 50 degrees when I woke up, and I was delighted to have packed warm sleepwear. On the day’s agenda was a drive back through the Grand Tetons into Yellowstone to see Old Faithful.

When you’ve been on the road for several weeks, you don’t think about what day or weekend it is until you’re in a caravan of cars and RVs inching along. What’s more American than to spend Labor Day weekend in a national park or two? I didn’t mind the slow pace; it gave me time to take in the view.

Into Yellowstone from the South Gate

Along the drive through Yellowstone, I came across Lewis Falls and took a quick break along with the other visitors to scurry across the road and take pictures of the falls.

I made it to the parking lot for Old Faithful about 45 minutes before the next scheduled eruption and realized I grossly underestimated its popularity. The parking lot was packed. Not a single parking space to be found. So I left Old Faithful for another trip and continued my drive through Yellowstone. Not but a couple of minutes from the Old Faithful parking lot, I came across the Black Sand Basin. This time I found parking and was rewarded with geysers and deep rainbow-colored hot spring pools.

My Drive Through Yellowstone

(and the Parking Lot of Old Faithful)

I crossed into Montana through the West Yellowstone gate. I pulled over to stretch my legs and discovered Quake Lake. The lake was created when a 7.5 magnitude earthquake in 1959 caused a landslide and natural dam to form on the Madison River. You can see the tips of the (now dead) pines sticking out of the water, and the story is fascinating.

I pulled over to an Exxon in Three Forks, MT, to get gas and snacks, and that’s when I realized just how thick the smoke from the wildfires had gotten. The sun glowed through the haze like a scene from a post-apocalyptic world.

With amazement and anxiety, I continued to my stop for the night at the Townsend / Canyon Ferry Lake KOA. I was headed toward the fires, not yet close enough to see anything other than the smoke.

At the KOA, there was only one other tent camper. Everyone else was in RVs. I pulled up to the site to find Elizabeth and her dog Bonnie, chatting with a couple of other campers. I soon learned she was biking across the country to the east along a similar route to the one I’d just driven west. To be clear, we’re not talking a motorcycle; we’re talking a pedal bike, with a small trailer for her camping gear and a place for Bonnie to sit when it was too dangerous for her to run alongside Elizabeth on her bike. I joked with her about how I thought I was roughing it as I pulled out my air mattress, blankets, and two pillows for my tent.

Due to the proximity of the campsite to the wildfires and the dry, windy weather, campfires and camp stoves were prohibited. So dinner was cold, leftover hot dogs from the grill at Jackson Hole and beer. At the same time, Elizabeth and I had a deep conversation about the state of the education system in the U.S. and swapped suggestions for sites to see along with our respective trips.

A Change of Plans

The next morning I went to the camp store for a free hot cup of coffee (the morning winds were cold!), and a couple smokes out on the porch out of the wind. The colorful manager laughed as folks drove down to Canyon Ferry Lake with their fishing boats in tow, only to come back shortly after when they realized the wind was too much to handle on the lake. When I told her I was on my way to Glacier National Park to drive Going to the Sun road, she handed me the awful news that the park closed just that morning as it was in the heart of the wildfires. My first thought was to the camper I met in Mitchell, SD, who was camping in Glacier as we spoke. My second thought was to the campsites I’d already reserved. I was really hoping they would take mercy on me and process the refunds even though it was less than 48 hours from my stay since campsites near Glacier are more expensive than any of the other places I’d stayed along the way. Unfortunately, that was not the case, and I decided my life was worth more than the $100 loss on the two sites. I changed my plans and decided to rent a hotel in Missoula, only a few hours from Towsend, so I could regroup and figure out how I would adjust reservations in Seattle and the rest of my trip. Note, in most cases, I didn’t make reservations until a couple of days before, if at all. However, Seattle I’d booked before I left DC because I saw a great deal on a place downtown.

For those curious, a few days later, I did hear from my camp friend from Mitchell. He managed to escape unscathed. I will make it to Glacier National Park, and I will drive Going to the Sun Road.

More about Missoula, and missing days, in my next edition…

One response to “Yellowstone on Labor Day Weekend”