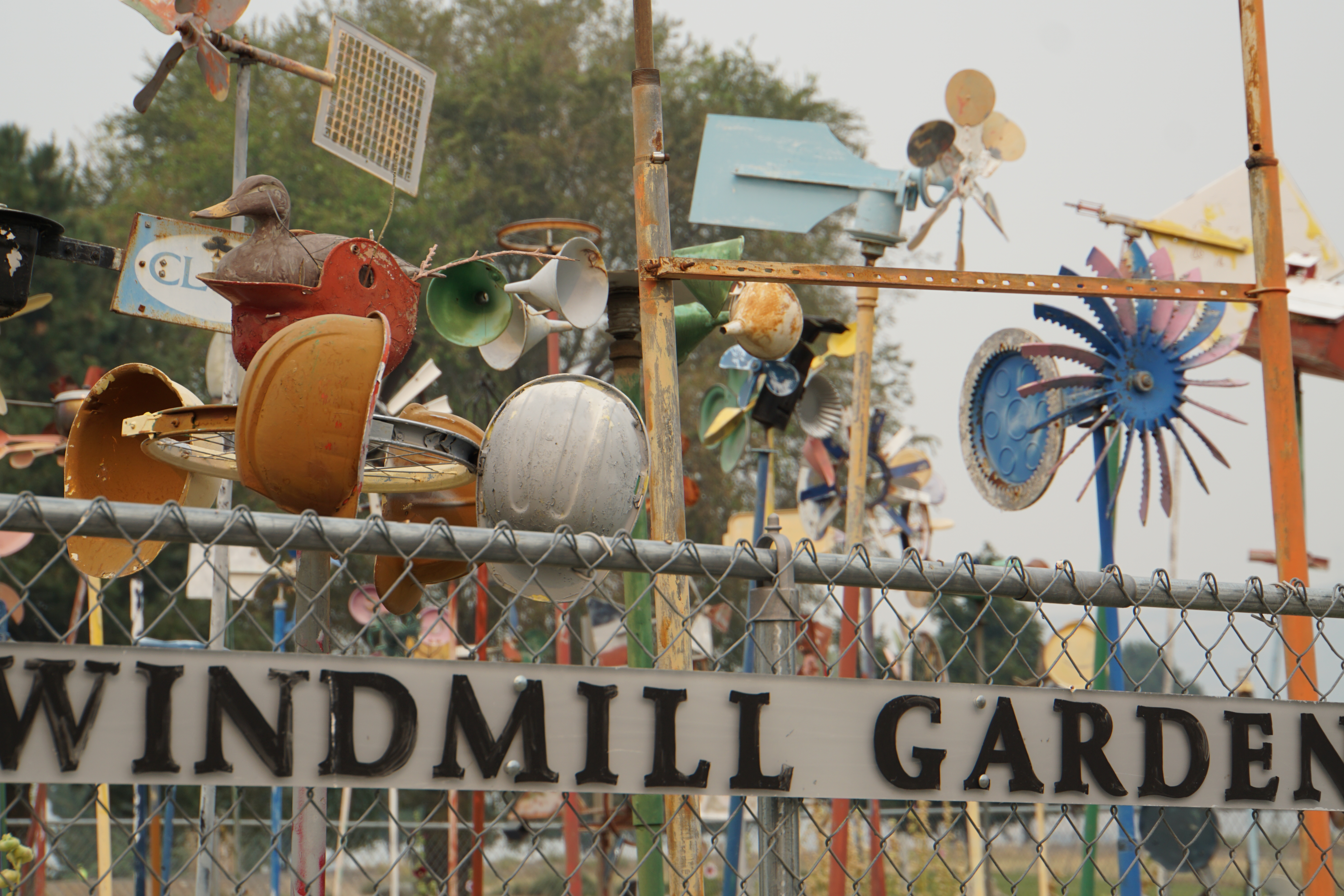 When I last left you, readers, I was cranky because I woke up in Steamboat Rock State Park believing I would end the day in Seattle. I was tired of cold food (due to the campfire restrictions caused by the wildfires) and ready for a couple days of no driving. But instead, I needed to kill one more day because my reservations were for the 7th of September, and I’d already gone through quite the process just to get them changed to that. So, I put on my explorer hat and decided I would not let this get me down.

I drove down to the public access beach, which sits in the shadow of the rock formation where the park gets its name. Steamboat Rock rises 650 feet up out of the Banks Lake, a reservoir south of the Grand Coulee Dam on the Columbia River.

I left Steamboat Rock State Park and headed back the way I’d come the day before for two quick stops, even though my destination was in the other direction. One was the Gehrke Windmill Garden, something I’d bookmarked from Road Trip USA. Sitting in the middle of a parking lot on Hwy-155, the garden is a collection of whirligigs and windmills protected by a tall fence and made even more bizarre by the haze that still hung thick in the air.

After a quick tour of the Grand Coulee Dam Visitor’s Center I began my journey west to Leavenworth, another location I found in my Road Trip USA book, as part of “The Great Northern” route. Leavenworth reinvented itself in the 1960’s as a Bavarian village. Only 130 miles from Seattle, I was originally just going to drive through. However, since I had the extra day, I made Leavenworth my destination for the day. When I arrived in town, I spoiled myself by reserving a cabin at the local KOA, using my handy KOA app. I found a great parking spot on Front Street, where pseudo-chalets line the street. It was time to eat, and some quick research told me Munchen Haus was the spot to be. I gorged myself on a bratwurst, German pretzel, and potato soup, and finished it off with a delicious “Icicle Dirty Face Ale.”

I explored the little shops along Front Street. I picked up a book full of pictures and stories about teardrops and tiny trailers, aptly named “Teardrops and Tiny Trailers.” At the end of the street, I found a local distillery and coffee shop. Blue Spirits Lake Chelan had a bottle that caught my eye; espresso flavored vodka, distilled using local glacier water and American grain. The shopkeeper recommended I drink it on ice with orange zest. I needed something to decompress with, so I picked up a bottle and headed to the Safeway that was on the way to the campsite.

A brief tour of Front Street –

If you’ve never stayed at a camping cabin, it’s important to mention, they do not come with linens. I dragged in my sleeping bag and pillows and decided I needed a refreshing dip in the KOA pool. The cold water made my aches more apparent, but the hot shower after melted them away. I meandered back down to my cabin and cracked open the bottle of vodka and the “big ass shot glass” I bought at a gas station in Montana (because why not?). After a few glasses, I slept like a baby in my little cabin.

September 7th I woke up ready to get to Seattle but needed sustenance first. I picked the Leavenworth Golf Club for breakfast where I had  German sausage and eggs, hash browns and English muffin, and coffee, while watching a bottle blond mom down a number of Mimosas, early on a Thursday morning. I wouldn’t expect any less from a golf club.

Seattle was absolutely awesome. Tune in next time!