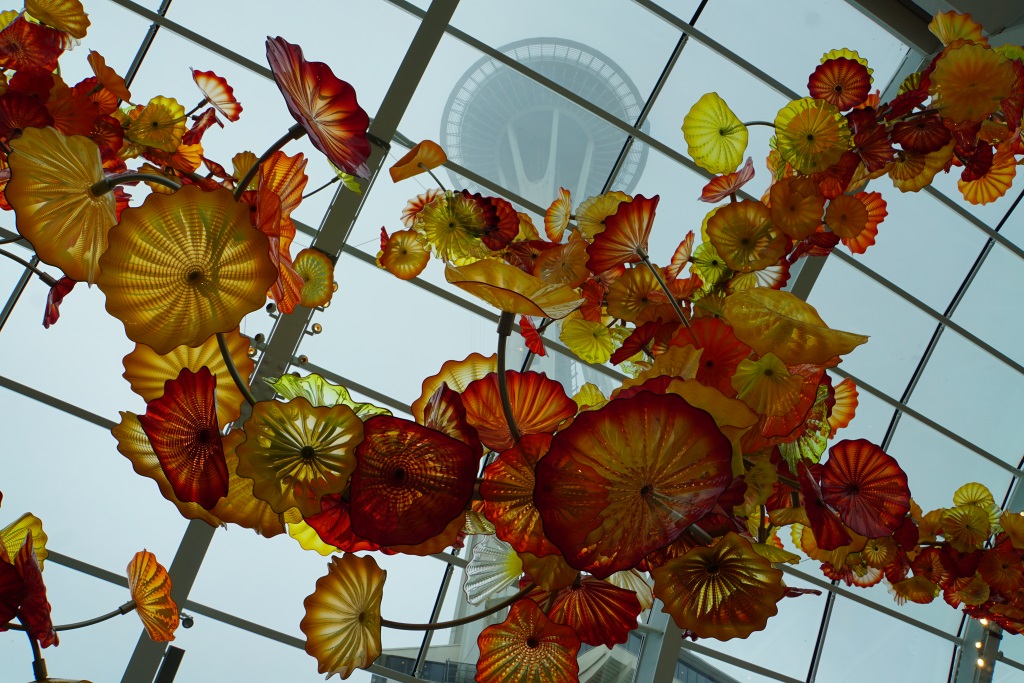 Excited to finally be on my way to Seattle, I spoiled myself with a delicious breakfast at the Leavenworth Golf Club before hitting the road. The trip to Seattle was a blissfully short one, with just one stop at a place called Deception Falls, and I arrived around 1:30 PM. Deception Falls runs directly under US-2, with a metal bridge from the parking lot to the falls. The bridge made me a little anxious, but I managed to walk over it without breaking into a cold sweat.

The “hotel” I selected was not actually a hotel. It was an apartment at the Icon Apartments (Contemporary Suites near Pioneer Square) right across the street from the Amtrak Station in the International District, downtown Seattle. After checking in and chatting with the Property Manager about the best place to get a pedicure, I dragged ev-er-y-thing out of the car up to the apartment. The plan was to use the washer and dryer to wash everything and repack the car.

Also, on my mechanic’s advisement, I had an appointment the next day with a Volkswagen dealership to have my oil changed and a safety check done on the whole car. I figured it would be easier for them if the vehicle wasn’t loaded to the brim with stinky, filthy, camping gear.

I drove to University Volkswagen to drop the car off for servicing. The team there was so thoughtful, even offering to drive me back to my hotel. I thanked them but asked instead how to take public transportation (I always think of it as the best way to see a city). They instructed me to walk to the University of Washington metro station.

I headed out and realized very quickly I’d forgotten to eat breakfast. I walked into a local vegetarian cafe and promptly walked back out when I realized that it would not offer me the kind of food I like. A block away, I was rewarded with a Jack In The Box. I ungracefully scarfed down breakfast and continued on my way.

A little over a mile and 28 minutes later, I arrived at the train station. I played a very convincing local (by accident) to a woman visiting her daughter at the university. She wasn’t sure how to use the train, and I’d done a great job of pretending I knew what I was doing. Once I clarified I was not a local, she told me that I must visit the Chihuly Garden if I did nothing else. I thanked her for her recommendation and headed back to my apartment.

From my apartment, I walked a short 10 minutes to the infamous Bill Speidel’s Underground Tour. Just before I entered the tour, University Volkswagen called to let me know my car was ready. I told them I’d head back to pick it up after the tour.

If you are ever in Seattle, I highly recommend the Underground Tour. The tour lasts about an hour and a half and is very popular, so get tickets early. The Underground tour will take you through what is left of the original city below modern-day Seattle. The history of how the original city was created, destroyed, and rebuilt, is absolutely fascinating.

I took the bus back up to my freshly oiled and detailed car and drove back to Pike’s Place Market. I would not recommend driving down there, as it’s always pretty busy. However, I was fortunate enough to find parking right across from the market. The unassuming facade did not let on that the market continued five stories down. I only managed to explore about a fifth of that. I did enjoy a light lunch of prawns and smoked salmon at the counter of the Athenian Seafood Restaurant & Bar in the market.

From there, I headed to Elliot’s Oyster House, where a friend’s cousin was supposed to be working. Come to find out she’d left several months before. However, I still enjoyed my oysters, scallops, and Pendleton smoked old fashioned in a packed house.

Interestingly enough, Seattle was the first place I saw consistent sunshine after traveling through the wildfires. According to the previous day’s underground tour, Seattle sees rain 300 days a year. I was lucky to get 3 of the other 65 days.

My first stop was the gravesite of Bruce and Brandon Lee in Lake View Cemetary. There were only a couple other people there, which gave me time to take in the headstones of two talented men who were taken too soon.

From Lake View Cemetary, I headed to Seattle Center to tour the Space Needle and Chihuly Garden and Glass. I chose to skip the Museum of Pop Culture, and I’ve been told since the trip that I should have gone. There’s always next time.

As I approached the Space Needle from the parking garage, I was met by a man selling peace, by way of beaded bracelets. Caught up in the moment of my adventure, I bought the bracelets and added my name to the list of donors for peace. I still wear those bracelets to this day.

After a trip to the top of the Space Needle, I visited Chihuly Garden and Glass and was not disappointed. Seeing these beautiful delicate pieces made from multi-colored glass, suspended from the ceiling, set up as displays, words cannot begin to describe it, and I don’t think my pictures do it justice.

After almost two hours at Chihuly, I bought a round-trip ticket on the Seattle Center Monorail, a fun, short ride from Seattle Center to Westlake Center. I didn’t head straight back. Instead, I looked for a Sprint Store to take advantage of the lifetime warranty on my (now) cracked screen protector for my phone. The folks at Sprint were friendly enough to explain I needed to go to the manufacturer. They provided me with information on the closest store, but I decided it wasn’t worth the hassle. I hopped back on the monorail to Seattle Center, back to the car, and back to the apartment.

After a couple hours of relaxing, my next stop on my Seattle list was up. Just a couple blocks from where I was staying was the Seattle Pinball Museum. You buy a ticket, and you get to play as many pinball games as you want from the machines set up in chronological order. I easily spent over two hours there. Dinner was a quiet (as in I was the only diner there) place called J Sushi. I closed the evening out by enjoying a dance-off during a festival in the International District.

On the recommendation of the bicycle adventurer I met in Montana, the plan was to take the ferry from Seattle to Bainbridge and drive the Olympic Penninsula’s north side. This would be my first time driving onto a ferry, in a trip full of firsts. I drive up to the ticket gate, and the gentleman asks me which ferry I’m taking. I stammer, uh, I, it starts with a B? Of course, there were two (Bainbridge and Bremerton). I picked the one that sounded right, and really hoped I’d selected the correct one. He had no time for my ignorance. Luckily, I had. On the ferry, I watched a man. His dog relaxed most unusually (check out the picture below). As we approached Bainbridge Island, the Olympic Mountains came into view way off in the distance.

Once on Bainbridge Island, I headed northwest to the beginning of route 101. Lunch was at the Next Door Gastropub in Port Angelos. I desperately needed coffee an hour later, so I stopped at the Hungry Bear Cafe in Beaver for a cup to go.

From there, I made my way to the Kalaloch Campground. Finally, I was on the Pacific Coast, looking out over the ocean, just under a month from leaving the east coast.